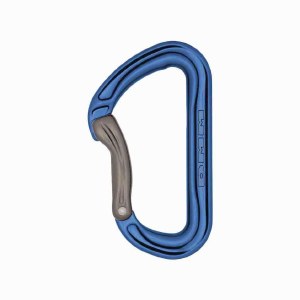 Due to its relatively low weight, the Shadow gives you the edge when onsight sport climbing. This also means the Shadow is good for sport climbers who occasionally go trad climbing but don’t want a second set of quickdraws

Areas where the Shadow hangs on bolts have been reinforced with extra metal to resist bolt damage. A clean nose reduces snagging and makes stripping steep routes easier, improving security and functionality

The Shadow’s straight gate features thumb grips that make it easier to open, while its broad base gives plenty of room for racking gear.

-Sport carabiners are designed to be robust and make clipping easy. Hot forging allows extra metal to be moved to areas of high wear, making these carabiners suitable for clipping bolts, repeated falls, and the intensive use of modern sport climbing.

-Solid gates are robust and give positive handling. Grooves in the gate give extra grip, increasing control when making tricky clips. Solid gate carabiners are suited to sport climbing, where ease of handling and resistance to wear are more important than low weight.

-This carabiner's nose slots into a groove in the gate, allowing it to achieve full strength without a gate notch. This creates a clean internal profile that won't catch on gear, bolts or slings, giving easier clipping and stripping of routes.

-I-Beam construction techniques allow carabiners to be lighter without compromising strength. This is achieved through hot forging, a process which allows metal to be made into complex shapes that improve functionality.

This product has not yet been reviewed.

Please login or register to write a review for this product.