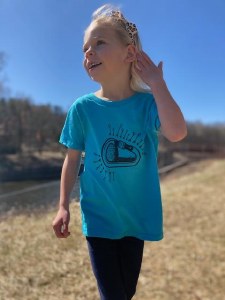 Young Women Who Crush (YWWC) is a rock climbing and leadership development program serving young women and gender expansive youth from NYC public schools. The YWWC program empowers girls to become not just climbers, but leaders in both their communities and the outdoors. We're giving every dollar from sales of these shirts directly to YWWC. Not proceeds or profits after costs: sales. So you spend $30 on a shirt, we give them $30. Buy a shirt and help support YWWC's climbing trip to Rumney, NH in July!

A note from the artist: My name is Marjana Tafader and I’m a junior in college. I was introduced to rock climbing through Young Women Who Crush in 2018, and I have since been involved as a mentee and eventually a mentor. I was inspired to create this design after receiving a lot of compliments and interest on a similar t-shirt I hand embroidered for myself. More specifically, the Shawangunk ridge design was inspired by the fact that it’s the first outdoor place I’ve climbed at and most of the crushers do. So, it’s near and dear to many of us. I hope this brings some joy and happiness to anyone who wears it. [Photo of Marjana Tafader wearing her original embroidered shirt by Kyle Stapp]

YWWC Benefit Shirt in youth is modeled by Kaiya Nelson-Krauer, daughter of Jason and Melissa. Melissa shared that Kaiya is a determined young woman, remarking that she is a "fierce and strong warrior - tiny but mighty!". We're looking at the next generation of climbers, folks!

Made in the USA

This product has not yet been reviewed.

Please login or register to write a review for this product.